I LOST MY DOG

Our condolences on the loss of your dog.  The good news is that you have a good chance of finding him/her.  The bad news is that you may be looking in all the wrong places.  In order to have the best chance of recovering your lost dog, you need to take into consideration why he left, his temperament (or personality), the circumstances surrounding his loss, and the human factor.  All dogs are individuals.

That depends on a number of factors:

Why did your dog leave?

The three most common reasons why dogs become separated from their families are opportunistic journey, wanderlust, and blind panic.

Opportunistic journey is when a gate or door is accidentally left open. While some dogs will remain in their yards or at their homes, most simply can’t refuse the temptation to explore when presented the opportunity. Although these dogs might not actively attempt to leave, their noses just lead them on a journey that can take them blocks or even miles from home.

Wanderlust is a common problem in intact male dogs of any breed as well as certain breeds like hounds. These dogs will actively attempt to escape by climbing, digging, or wiggling to escape their yards. They will also bolt out a door or pull to get away from their handler if the opportunity presents itself. Wanderlust is responsible for the displacement of many dogs and a major contributing factor to the stray populations in our shelters.

Blind panic is a situation in which the “flight” instinct (from the hardwired “fight or flight” response to stimuli) kicks in and a dog runs in what we call a blind panic. This can happen for three reasons: xenophobic (skittish) temperament, loud noises (thunder, gunfire), or traumatic incident (involved in car accident, explosion, etc). These dogs are the most difficult to catch since they will travel far, travel fast, and avoid human contact, even with their own family members!

How far did your dog go?

There are six major factors that influence the distances that a lost dog will travel: Temperament, Circumstances, Weather, Terrain, Appearance, and Population Density.

Temperament of the Dog

How a dog behaves towards strangers influences how far it will travel (when lost) before someone intervenes and rescues it. There are three primary behavioral categories of lost dogs: Gregarious Dogs, Aloof Dogs, and Xenophobic Dogs.

Gregarious Dogs: Wiggly-butt, friendly dogs are more inclined to go directly up to the first person who calls them. Depending on the terrain and population density where the dog was lost, these dogs will generally be found fairly close to home or will be picked up by someone close to the escape point. Gregarious dogs are often “adopted” by individuals (not shelter or rescue workers) who find them.

Advice: Flyers, posters and intersection alerts can be valuable tools in finding gregarious dogs.  Also be sure to contact all nearby shelters in case someone passing through picked the dog up and took it to a shelter.

Aloof Dogs: Dogs with aloof temperaments are wary of strangers and will initially avoid human contact. They will be inclined to accept human contact only after they have overcome fear issues and become hungry enough. While these dogs can travel a great distance, aloof dogs eventually can be enticed with food and patience, typically by experienced rescuers who know how to approach and capture a wary dog. These dogs are often recovered by rescue group volunteers, and their wariness can be easily misinterpreted as “abused.” In addition, these dogs are often not recovered for weeks or months after their escape, giving them the physical appearance (thinness, injuries, stickers, ticks, etc.) that they are homeless, abused, and unloved.

Advice: Flyers, posters and intersection alerts can be valuable tools when trying to determine the whereabouts of an Aloof Dog.  Flyers and posters should include a warning “Do Not Chase.  If seen, call ###-#### as soon as possible.  It is imperative that shelters, rescue groups and veterinarians be notified your dog is missing and be patient – it may be a while before your dog is seen.

Xenophobic (Fearful) Dogs: Xenophobia means “fear or hatred of things strange or foreign.” Dogs with xenophobic temperaments (due to genetics and/or puppyhood experiences) are more inclined to travel farther and are at a higher risk of being hit by cars. Due to their cowering, fearful behavior, people assume these dogs were “abused,” and even if the dog has ID tags, they will refuse to contact the previous owner. Some of these panic-stricken dogs will even run from their owners! It may be necessary to use other dogs to get close enough to capture them or to use baited dog traps.

Advice: Flyers and posters an help determine the approximate whereabout of a Fearful Dog, but contacting area shelters and rescue groups is imperative.  Be prepared to use a baited trap, wildlife camera and/or another dog to recover your pet. 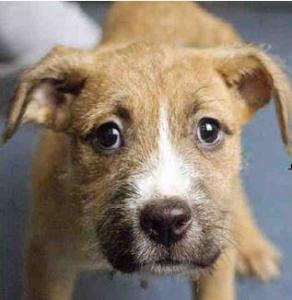 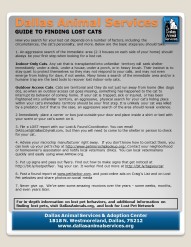 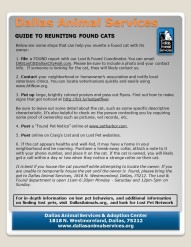